It’s nearly time for us to leave this green and pleasant island and embark on a journey which we’ve dreamt and talked about endlessly. I would say we have been very lucky in the last couple of years and have been able to use events, which were very much out of our control and would normally be a cause for concern, to our advantage.  Our pint glass is always half full now......personally, I’d rather it was ‘all the way’ full but that’s just because I like beer!


The trip will take us through Europe down to Bulgaria to meet a few friends who have their own trips on the go.  From there it’s through Turkey, Russia, Mongolia and then back into Russia.  From the east coast of Russia it’s a long swim (probably via South Korea) to Seattle or Vancouver. From there, at the moment, it’s south basically.

The bike is a BMW R100GS PD with a Hedingham ETH sidecar attached. We’ve had it for a few years now and it is so much fun. 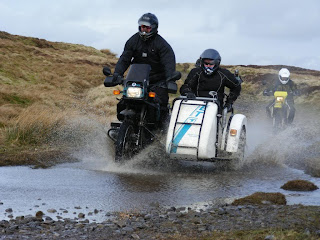 As we’ve been using the bike, there have been things that Iain has decided he’d like to change and as prep for this journey he’s stripped the bike down and made those changes.  For pics of the re-build, follow this link: http://advrider.com/forums/showthread.php?t=762454
Posted by Iain + Debz at 17:56 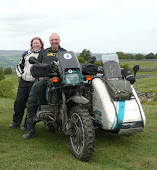 Iain + Debz
We are Iain Patterson and Debbie Simpson and our aim is to travel 'round the world' on our BMW outfit (no, not a BMW frock or suit! Outfit is a commonly used alternative name for a bike and sidecar). Iain is from Sunderland in England and Debz is from Forfar in Scotland but living in Sunderland. Having met a few years ago, we both enjoyed motorbikes and travel so decided to put the 2 together and after a 2 week trip to Norway in 2006 and then a 3 week run down to Romania and back in 2007, we thought 'wouldn't it be great to just go and explore but with no real time restrictions, not having to think 'right - we need to start heading home now' - well, at least not for a year or 2.' So here we are, after a lot of years hard work and saving, venturing into, what is for us, the unknown........